The Adelaide Sunday Mail has some top quality journalism today. There is a full two page spread showing, by suburb, what your Adelaide house will be worth in 2016.

Titled “Future Shock : Welcome to our millionaire city“, they tell us that Adelaide will have 83 million-dollar suburbs by 2016.

They go on to interview two 16 year olds contemplating their futures in ten years time and if they will be able to buy a house.

“The 2016 projections were made by applying the annual 8.7 per cent growth rate recorded by the Valuer General’s office in the past decade to the next ten years.”

“Independent real estate analyst firm Australian Property Monitors said the predictions were conservative.” “Over the past decade the population and economy have grown and there is no reason why that wouldn’t continue to put pressure on prices to grow at around the same rate,” APM operations manager Michael McNamara said.

This is some interesting predictions. Normally the first rule of investing is past returns are not an indication of future returns. Also it’s hard to draw a straight line on cyclic markets. A post from Smurf1976 in the Aussie Stock Forums really sums this up :

There is also the issue of timing where it is foolish to look only at the recent past. I’ll use a weather example to make the point.

The ridiculous example above shows what happens when you only look at part of the cycle. Those with a bit more knowledge of the weather would say that we’re at or near the peak of the seasonal temperature cycle and June 2007 isn’t likely to be that much different to 12 months earlier. It goes up AND DOWN. Just like asset valuations (valuations as distinct from prices).

This is no different to what our Real Estate experts have done. They have extrapolated a straight line to determine what the prices will be in 2016.

What is even more interesting is they divulge their mistakes to readers. The ‘experts’ mention that average house prices have increased over the past decade by 160%, but for the same period wage growth was 54% – but that doesn’t seem to bother them. Even if the cost to service a mortgage grew to more than 100% of the average wage, it would appear they believe every Australian would still be able to find the money to service that debt and somehow pay bills, buy food and other essential items. Their logic really stacks up!

So lets do some forecasting for ourselves : 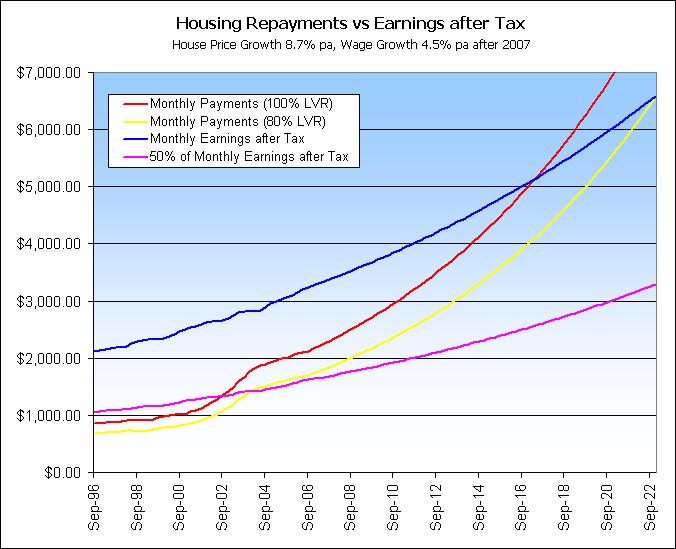 This graph shows monthly house repayments for the medium home in Adelaide versus the earnings after tax for the average adult full time wage earner living in Adelaide. We have two monthly repayment figures, one for someone borrowing 100%, i.e. has a loan to valuation ratio (LVR) of 100% and another one for a more conservative owner who has saved a 20% deposit. We also have another line showing 50% of the average adult full time wage.

At the start of 2007, we apply some of the property experts forecasting. We apply a 8.7% growth rate to the cost of houses, and a 4.5% growth rate to earnings. The term of the loan is 25 years, and a 7.5% interest rate is applied for the entire duration, even though it is highly likely interest rates will rise. Tax rates also remain constant at 2007 levels.

Historically 30-35% of your wages should be spent on mortgage repayments. That would be ridiculous today, so we upped the line to 50%. So you can see by the end of the 2003 boom, the idea of a single person taking out a mortgage went out the window. The options you would have is to get a 40 or 50 year loan and face still paying it off in retirement, or taking the risk and commit closer to 70% of your disposable income towards the mortgage.

Now you must have two wage earners to buy a house. So a first home is still within the reach of a couple. However for a couple that borrows 100%, in September 2017 the costs to service the mortgage will hit 100% of the single wage. This would mean today’s young couples really have to do the sums on weather or not they can afford children. After 2017, two couples (3+ full time wage earners) would have to purchase a house and board together.