Paralysed by the 2007/08 Global Financial Crisis (GFC) stemming from the burden of unsustainable debt levels, central banks and governments have tirelessly worked in unison to recklessly pump world economies full of more and more unproductive and destructive debt. Lengthy periods of emergency low interest rates and ballooning central bank balance sheets have accelerated growth in many of the very bubbles that abruptly brought the world to its knees in 2008.

A decade on, many wrongly assume the GFC is all but history – a crisis consigned to the history books. But in realty the 2008 crisis was just stage one, the warm up lap, of a much bigger financial crisis yet to rear its ugly head.

Algebris Investments have recently compiled a list of the world’s fourteen largest potential bubbles that exist today. They have been ranked by risk based on the size, duration, appreciation, valuation and evidence of irrational behavior.

Algebris’ Alberto Gallo remarked, “We’re in a world where most assets are overvalued, so in a world where almost everything looks like a bubble, the definition of a bubble has to be changed. You have to try to invest in the assets which look the least overvalued,”

1. “This time is different” – normal rules simply don’t apply.
2. “Fear of missing out” – get in, before you are priced out of the market forever.
3. “Sky is the limit” – the gains are limitless.
4. Flipping – speculators hoping for a quick profit.
5. “No credit, no problem” – bubbles normally form when credit is cheap and available, poor lending standards.
6. “Buy the dip” – Policymakers will be on hand to prop up the market, and bail it out. Policymakers won’t let the market fall.
7. “Borrow while you can” – rates are cheap, never a better time to buy.
8. “Bidding wars” – buyers fight for assets. Sydney property bubble anyone?
9. “The trend is your friend” – houses doubled over the last 7 years, so they will no doubt double over the next 7.
10. “Financial engineering” – derivative products to extract even more returns from the existing asset.

So where are today’s biggest financial bubbles?

According to Algebris analysis, Property Bubbles rank in first, second and third place as they are likely to inflict the most damage as most citizens require shelter.

Australia’s Property market is currently the world’s largest potential bubble having appreciated 510 per cent over 29 years. The London and Hong Kong Property Bubbles rank in second and third place. 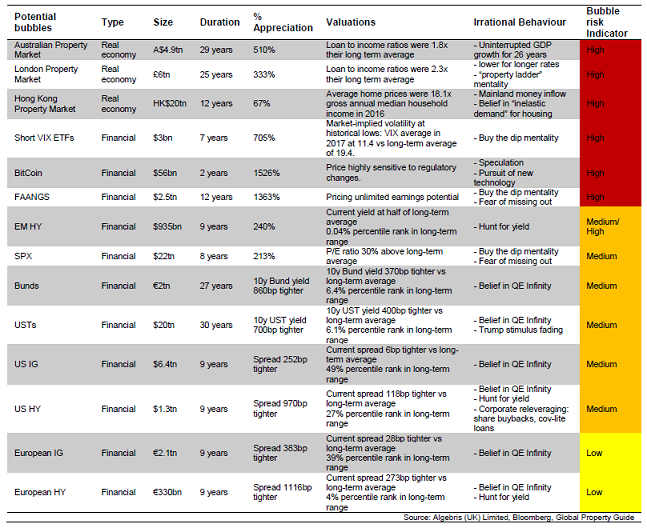