A flawed report claiming Labor’s plan to quarantine negative gearing to new homes would result in rents surging by up to ten percent, and new home builds falling 7,200 annually, has embarrassingly backed fired for the government.

The BIS Shrapnel report, riddled with significant errors such as Australia’s GDP being only a paltry $190 million, made sensationalist front page news in most News Limited tabloids today. (‘Negative gearing: Adelaide renters to be hit hard by Labor plan, BIS Shrapnel study shows‘)

Later, It was declared the report was written late last year and had nothing to do with Labor’s policy. In fact, the modelling made many different policy assumptions such as investors could only deduct losses against their property portfolio, while Labor will allow losses to be deducted against other investment income.

It comes at a bad time for the government as it tries to argue that negative gearing doesn’t distort the market, yet claims serious adverse consequences if negative gearing is quarantined to new investments only. 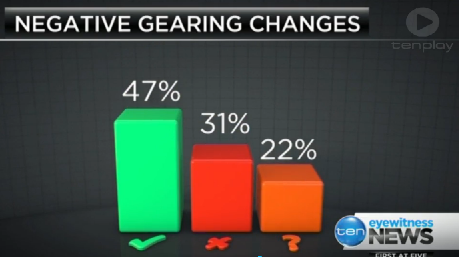 Early polling shows the majority of voters are in support of Labor’s negative gearing curbs.