An unprecedented 10,200 vacant residential properties are now available for rent in Perth, according to an ABC news report published today.

Perth City now has a distressing vacancy rate of 6 per cent, while the suburbs hover around an highly elevated 4 per cent, about three times the long term average.

REIWA president Hayden Groves remarks, “It really is quite startling.”

With every Australian aspiring to be a negatively geared multiple property landlord, and with a chronic shortage of renters, tenants are the big winners.

Groves told the ABC, “Tenants certainly have the rental market in their favour at the moment.”

Data from SQM affirm the challenge facing landlords as rents plunge across Perth and Western Australia. In the past twelve months, rents for houses in Perth and surrounding suburbs are down an average of 12 per cent. Units are holding up only marginally better at 11 per cent. Over three years, rents for houses have fallen 26 per cent and units 23 per cent. The data shows no signs of abating.

Regional centers exposed more heavily to the mining downturn have notched up even larger falls. Northern WA including the Pilbara region has seen rents fall for houses 35.4 per cent in the past twelve months.

Sale transactions down 40 percent, crash could be looming

In the March 2016 quarter, Perth Real Estate agents observed a 40 per cent collapse in the number of property transactions. This has even the most bullish agents running scared, as a slowdown is normally the precursor to price falls. 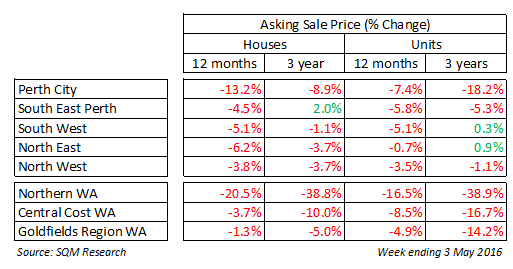 While Northern WA is already a couple of years into a serious property crash, Perth has been experiencing only moderate, single digit falls for a number of years. But this is expected to soon break out to double digit falls, officially designating a crash.