Australia is facing an unprecedented apartment oversupply as an estimated 230,000 new apartments flood the Melbourne, Sydney and Brisbane markets over the next 24 months.

The surge in new apartment building was in an attempt to satisfy the insatiable demand from the foreign Chinese property investor. Under an Australian law designed to increase housing stock, foreign investors can only purchase new dwellings. 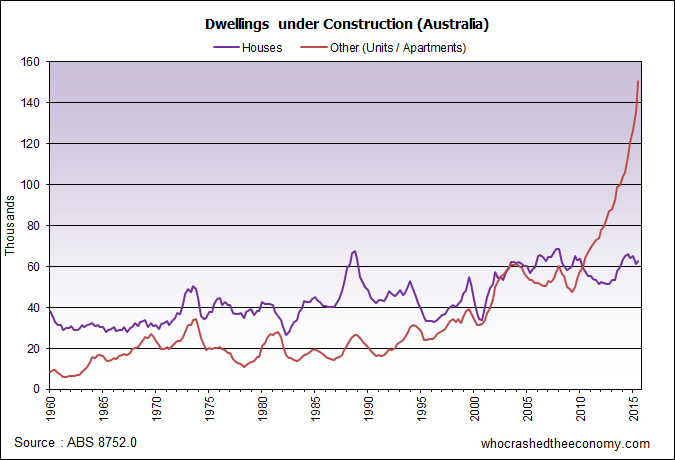 But as we reported in May (“Banks tighten screws on foreign buyers“) the banks were uncovering traces of what would turn out to be systemic fraud. The ANZ bank asked its Asian subsidiaries to verify and cross check the obscure offshore companies being cited as sources of foreign income to service these property loans. Most offshore companies didn’t exist.

By the end of April, the ANZ was forced to retract the approval on 90 loans to foreign investors. Not long after, the truth came out with the disclosure that ANZ and Westpac banks have approved hundreds of loans supported by fraudulent foreign income documentation. All the banks immediately began to toughen eligibility and serviceability requirements. Some even chose to freeze the writing of all new loans to foreigners, citing the risk was just too great.

Many foreigners had put down deposits on their apartments but were no longer eligible for the loans from Australia’s big banks, loans essential to complete settlement.

To help mitigate disaster, Chinese real estate portal, aofun.com.au has set up a Nominee Sale Platform in a bid to shift some of the thousands of apartments where buyers are unable to complete settlement.

But in an ironic twist, the foreign property investor has been locked out of the re-sale market and unable to snag a bargain.

According to a spokesperson from the Australian Taxation Office, “Under subsections 15(4) and (5) of the Foreign Acquisitions and Takeovers Act 1975, a dwelling is considered to be sold when an agreement becomes binding,”

“If the property is onsold after the date upon which the contract becomes binding, and prior to settlement, then this is considered to be an established dwelling.”

As foreign investors cannot purchase what is now deemed an established dwelling, they are unable to help soak up some of the burdening oversupply.

Not to be defeated, apartment sales agents are now targeting the first home buyer. Aofun even claims “Australian FIRST HOME BUYERS can pick up a bargain with the deposit already paid for”

Earlier this month, the Australia Bureau of Statistics (ABS) revised down first home buyer participation in the market skewed towards the speculative investor. Original figures suggested a low of just 14.1 per cent of buyers in July 2016 were first home buyers, but actual figures are much worst.

After revision, the ABS now believe just 13.2 per cent of participants in the market in July were first home buyers. Numbers had been steadily falling for four years. 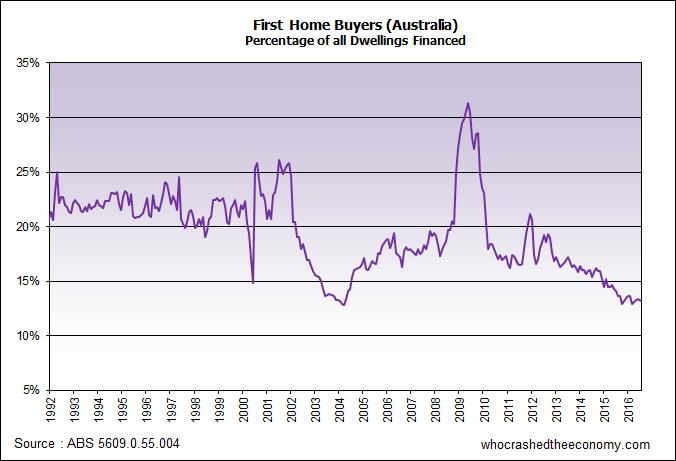 High housing costs have been zapping disposable incomes, shutting down business and leading to higher unemployment and the casualisation of the workforce. Coupled with run away house prices, first home buyers, the one who have jobs, are struggling to get into the housing market – regardless of if their staple diet includes smashed avocado with crumbled feta on five-grain toasted bread.

With trouble brewing in the apartment market, the banks are further cracking down on lending. On Saturday, the National Australia Bank (NAB) expanded its confidential lending blacklist to cover over 600 towns and suburbs. Buyers now need a minimum 30 per cent deposit to purchase property in these suburbs exposed to the mining downturn or apartment oversupply. Today, Bendigo and Adelaide bank cracked down on high risk locations increasing the minimum deposit to 40 per cent.

But it’s also a mistake to assume all Generation Y and X endeavor to enter Australia’s housing bubble and become lifetime debt slaves.

So the question stands, just who will purchase all the apartment defaults?